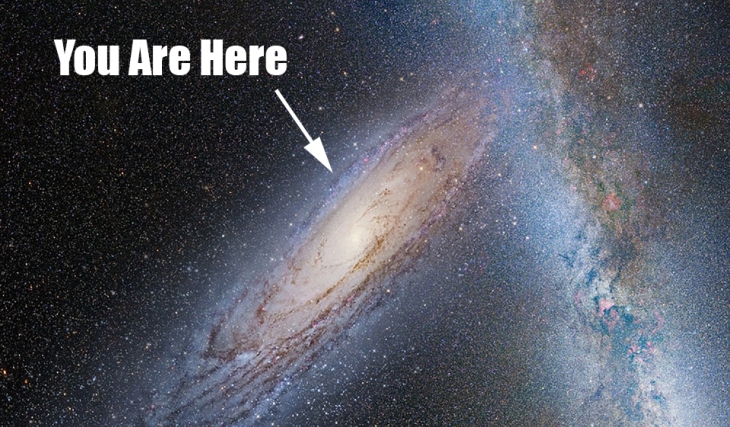 Yes, someday you will die. And you will be dead waaaay longer than you will have lived here on the physical realm we call Earth. (Yes, this is a motivational blog. Stay with me.)

Yes, eventually the sun will swallow the Earth, as presidential candidate Gary Johnson politely reminded us during his entertaining 2016 bid for the “big chair.”

Heck, if the sun doesn’t kill the human race (if we finally migrate off this rock), the eventual heat death of the universe will.

So what? Big deal.

How can I be so cavalier about our extinction? Because I live in the present. And so can you.

Right now, we still exist. The Earth still exists. And unlike any other species that has ever walked, slithered, swam, or flown on this planet (except maybe dolphins), we can contemplate our own existence, including the end of it. And that’s a wonderful gift.

Yes, death is a gift. It can be a great motivational tool, if we let it.

Self-awareness can indeed be beautiful…as long as you’re not squandering it.

You’ve already beaten the longest odds ever, just by being alive.

To paraphrase Les Brown, you beat 400 million other sperm to be here (ahem).

What are you doing to be worthy of that miracle?

Yes, I said it: you’re a miracle. A unique little snowflake. But I’m not saying it because it’s obligatory kumbaya fluff. This is empirical, scientific fact: the chances you ever came to exist were astronomical.

It doesn’t matter how you believe you got here. You’re special. Get over it.

Look, I don’t want you to feel pressured or anything. Even the smallest contribution to the betterment of the world makes you worthy. Some good news: you get to decide what your contribution is, and the size of it.

Note: I want you to be mindful of the fact our world contains both pain and beauty (contrary to how the news makes things seem exclusively horrible) and that means it’s exciting to be here.

Yes, this planet can be chaotic and deadly, and the people despicable. But you know that’s not all there is to our existence. Your lizard brain is biased toward negativity.Your higher mind lets you see the beauty. It’s up to you to recognize, and celebrate, the difference. What’s your focus going to be in the equation?

Still don’t believe the human race has redeeming qualities? Too bad, good things will still happen whether you believe in them or not.

(All apologies to the dolphins…)

It doesn’t matter how you think we came to be: random chance/evolution, God, aliens, whatever.

Because no matter why we exist, that doesn’t change the fact that we are indeed here. And for too long, we’ve been asking the wrong question.

We need to stop asking “what’s the meaning of life?” The question really is, “what meaning am I making for my life?”

Are you making your own meaning? If you’re not deciding what makes life meaningful for you, then I suggest you get started. Once you own that power, no one else can.

You have free will, folks. You get to decide your life’s purpose. Just do it.

Stand Up and Defy Oblivion

It’s you versus entropy in the ultimate battle! You have the ability to stand up to your inevitable oblivion and be defiant!

I don’t care if you do it just to be spiteful, try it out! Doesn’t it give you a thrill to know that despite being a relative speck in the cosmic immensity, you can declare to the vast universe that your short existence has meaning because you say so?

Tell the end of all things that it hasn’t claimed your life yet. And while you’re here, you’re going to make a difference, no matter how big or small.

You’re a conscious being, existing here and now on an oasis of life in an ocean of infinite black just beyond the thin layer of Earth’s atmosphere.

So, I’m begging you, stop living as if you have ten thousand years.

You’re a friggin’ miracle. If anyone tries to convince you otherwise, just remember two words: “sperm lottery.” That should shut down any argument.

I'm a writer, speaker, and an advocate for everyday heroism. I have over two decades of experience in the practical application of literature, philosophy, psychology, and other disciplines. The culmination of my work is the Live the Hero program, a life philosophy that promotes personal development combined with service to others. Live the Hero combines the wisdom found in the arts and humanities with the latest discoveries related to research in heroism science and positive psychology. You can learn more at livethehero.com. View all posts by Anthony Simeone

Speak Your Mind! Leave a Comment Below: Cancel reply